Percy Crow A story of secrets, deceit and damned lies! 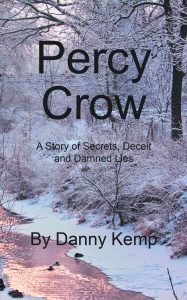 Percy Crow, twice captured in World War Two, first by the Nazis and then by the Russians, escapes in the bilges of a freighter from Soviet Russia to Hamburg where he sells his secrets to Meredith Paine, the head of British Intelligence.

Lord Maudlin Paterson hears of Percy’s account of a member of the Royal family’s sexual abuse of a fourteen-year-old girl in the Irish home of a fellow English lord. Disgusted to think that his beloved England could be besmirched in such an obscene manner, he sets out to find whatever the repulsive truth may be!

Many years after Maudlin’s death, the daughter of his illegitimate Russian son, Paulo Korovin, suddenly blurts out Percy’s name whilst being interrogated by the CIA for her spying activities. Harry Paterson, Maudlin’s legitimate great-grandson, is the only person to whom she’s willing to disclose what little of the spiralling web she knows!

Is there more to be discovered by Harry, as the rationale of his great-grandfather, hidden in the distorted mirrors of photographs at the back of an album, or, is there another reason much closer to home?

Not trusting British Intelligence, Harry, with his lifelong friend George Northcliffe, along with the new complication in his life, the beautiful Serena Abenazo, starts unravelling the clues. Where will the rattling bones of the sepia images lead him?

Over one hundred deceitful years covering more secrets that could be imagined are concealed by just two words; Percy Crow!

Daniel Kemp’s introduction to the world of espionage and mystery happened at an early age when his father was employed by the War Office in Whitehall, London, at the end of WWII. However, it wasn’t until after his father died that he showed any interest in anything other than himself! On leaving academia he took on many roles in his working life: a London police officer, mini-cab business owner, pub tenant and licensed London taxi driver, but never did he plan to become a writer. Nevertheless, after a road traffic accident left him suffering from PTSD and effectively—out of paid work for four years, he wrote and self-published his first novel —The Desolate Garden. Within three months of publication, that book was under a paid option to become a $30 million film. The option lasted for five years until distribution became an insurmountable problem for the production company. All seven of his novels are now published by Creativia with the seventh—The Widow’s Son, completing a three book series alongside: What Happened In Vienna, Jack? and Once I Was A Soldier. Under the Creativia publishing banner, The Desolate Garden went on to become a bestselling novel in World and Russian Literature in 2017. The following year, in May 2018, his book What Happened In Vienna, Jack? was a number one bestseller on four separate Amazon sites: America, UK, Canada, and Australia.  Although it's true to say that he mainly concentrates on what he knows most about; murders laced by the mystery involving spies, his diverse experience of life shows in the short stories he writes, namely: Why? A Complicated Love, and the intriguing story titled The Story That Had No Beginning. He is the recipient of rave reviews from a prestigious Manhattan publication and described as—the new Graham Green—by a highly placed employee of Waterstones Books, for whom he did a countrywide tour of book signing events. He has also appeared on 'live' television in the UK publicising that first novel of his. He continues to write novels, poetry and the occasional quote; this one is taken from the beginning of Once I Was A Soldier There is no morality to be found in evil. But to recognise that which is truly evil one must forget the rules of morality.
View all posts by Daniel Kemp →
This entry was posted in Author/Writer, Raconteur, Lyricist/Author/Copywriter and tagged Agents, BBC, Danny Kemp, http://danielkemp.co.uk/, http://www-thedesolategarden-com.co.uk/, london cab, Radio 4, Radio Kent, Radio London, radio today, sky. Bookmark the permalink.