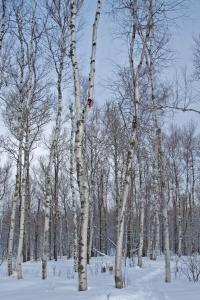 Gnarled branches with blackened boughs,
Standing steadfast against winter showers.
Driven snow piled high at the base,
Covering life, and leaving no trace.

Nests are empty, the birds have gone
To places where the days are long.
There to sing and chirp away
Returning here perhaps another day.

Grey pervades and rules supreme
Leaving me with a solitary dream
Of sunlit days and song filled air
Oh to live forever there!