How Do You Travel? 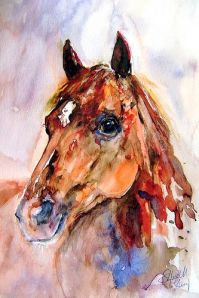 From Anything But Hackneyed. A collection of my early poems.

A rider gripping tightly, a mile long course.Seconds of tension, although a lifetime past.

Heart thumping energy. Will the hearts last?Half a length in it, one final thrust.

All or nothing. The win is a must!

The race is over. Prestige has been restored.

The world looked on, clapped and adored.
The horse was stabled. The rider slept.

The horse died that night, and the owner wept.

You see it was the owner who wanted the trophy,

The rider, merely did as he was paid.

As for the horse, well, it has been said,

That to run is why they are made.

Some say the journey doesn’t matter,

Saying the destination is the ultimate prize.

I say differently. It’s how you travel,

That shows the size of the heart you have inside.

Anything But Hackneyed. Amazon.co.uk