COME WALK WITH ME. By Shabeeh Haider 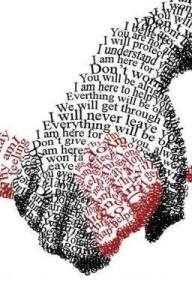 Come hold my hand and let us walk,

Your lips won’t speak, no need to talk.

I want to hear it all today,

All that your heartbeats have to say.

Your fingers intertwined in mine,

My life has never felt this fine.

When will we stop? Where will we go?

You do not ask, I do not know.

We’ll leave our world so far behind,

And live the world that’s in our mind.

I’ll hold you in a tight embrace,

That’s where you’ll be, that is your place.

This is the journey of our love,

It will continue up above.

We are two hearts but are one soul,

And when we meet, we become whole.

A Vagabond Heart, From Shabeeh Haider

4 Responses to COME WALK WITH ME. By Shabeeh Haider