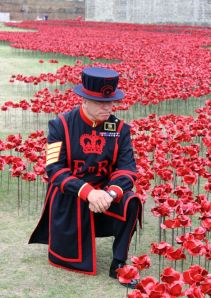 The commemorative poppies, for those that lost their lives in The First World War, displayed in the ‘moat’ at The Tower Of London. Many more are to be added over this closing year and then auctioned in favour of The British Legion.

2 Responses to London Salutes The Dead.