From Caleb and Linda Pirtle:

The Widow’s Son by Daniel Kemp is both an intriguing piece of writing and intriguing in terms of the genre of the political thriller. Daniel Kemp has created a tightly paced, engaging narrative presenting his reader with a murky, soiled, strangely exciting world of power and corruption.

This is a dark world of spies, lies, and deceivers, and from his newly created position as head of the British Joint Intelligence Committee, and with only one or two people he can trust, Daniel Kemp’s protagonist, Patrick West, realizes that he has a potential disaster on a worldwide scale; nothing short of a war on humanity, to circumvent.

And how is the narrator going to achieve this with deception on such an extensive scale?

Nothing is clear for him; why this promotion? Whom can he trust?

In a way, this book can be viewed through the lens of appearance and reality. I’m surprised I hadn’t thought of this before. After all the book is subtitled “lies and their consequences.”

Whom can Patrick West believe?

Whom can the reader believe?

Daniel Kemp has given us an engaging narrator, but how reliable is he? 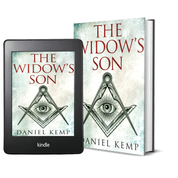 2 Responses to The Widow’s Son