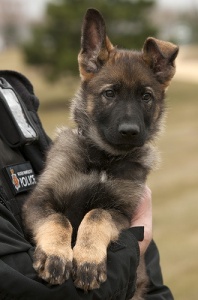 Don’t get me wrong, I love dogs, cats at a stretch, but dogs of most descriptions then I certainly do. I draw the line at greyhounds. One took a lump out of my leg when I was very young and trespassed in his garden simply to retrieve a ball; idiot, dog I mean, not me of course.

Back to the title of this little story because that’s what it is, not some reportage of an incident where I learned that police dogs are twits, least I hope not, but then that’s for you to decide. They can’t tell who the bad guy is you see if confused by a good guy in between. Now you may have known that, but at the time of the following occurrence, I didn’t.

I was about eighteen years of age, a Police Cadet on night duty, acting as the observer in the back of the division’s what now would be called the rapid response vehicle, but in those far distant days, it was called the Area Car. I was squashed between the rear nearside door, a dribbling hairy German Shepherd dog and his equally large human handler; a Police Sergeant who obviously had a healthy appetite. This was not the usual complement of passengers to be carried, but the dog and handler were without transport and, being on friendly terms with the driver of our car, he and the smelly dog had been invited along for the ride.

The dog reeked. He had that musty, dank smell of sweat and dirt that all long-haired dogs have but go unnoticed in the main. Now, pressed up tightly against me, it didn’t! As far as being an alert observer, that too was difficult in the circumstances as my window, the only one that I could see out of, was smeared due to the exhaled stinking breath of hairy, nameless dog and my inept attempts to keep it clear. It was a very cold night if you’re wondering why I didn’t simply open it. I’m not that daft, but I digress, my intelligence isn’t being examined here. Not yet at least.

Today, in the modern up to the minute police force, communications might well be different, but in those far off ‘olden days,’ information requiring the immediate response of an area car were dispatch not directly to that particular vehicle but through a mixed bag of messages, emanating from Scotland Yard, addressed to all the area cars and other radio-equipped vehicles in the Metropolitan Police District. The radio operator, sitting directly in front of me, had the task of decoding all of those, and picking the ones that were within our region of influence. It was a quiet night, and I heard the message at the same time as he and, presumably our driver and both unwanted guests!

“Romeo One,” that was us, the call sign of the car, just in case you’re starting to believe that I was dreaming of balconies and Juliet’s. “Romero One” No, I know I have already written that once but they did call twice, not because they thought that we were deaf but you know corporates, all the same; fussy. “A fight,” now the call had my full attention and funnily enough that of hairy dog. As I moved in my seat through the excitement of that word so did hairy smelly, and a blast of his halitosis hit me full in the face. I didn’t love him before, now a complete abhorrence came wafting over me.

“The corner of Deptford Broadway and Deptford Church Street. Several involved. Can you deal?” I forgave smelly on the hearing the word, several. ‘Don’t care how many’ I thought. Me, three others and a dog, they had no chance.

We were off. Hairy smelly dog fidgeting and, would you believe, yawning, but no siren nor blue light. We wanted to get them, not frighten them away as in the cops and robbers films on TV.  We arrived no more than a minute or so after the call, and I was ready. As we were pulling up, one man ran across the front of the car heading eastwards at pace. I was out the door and after him before the car had fully stopped. I had no idea what he had done of course, but as he was running. I figured he must have done something wrong. Reasonable?

At that stage of my life I was quick and the start he had, of about a twenty-five to thirty yards on me, was rapidly closing. Suddenly there was a lot of noise behind me, but to be truthful I was not paying much attention to it. Why should I? I had the prey within my grasp. The noise of his running strides and my pounding boots were all I was aware of.

It was all over in no more than five seconds.

An earth-shattering scream cut the distance between where I was, and what was happening behind. “STOP, STAND STILL.” An authoritative voice commanded. Now, put yourself in my place, who would you think that order was aimed at? Yes, you’re right and I thought so too, him in front just about to be tackled by a flying me.

A split second later I was on the ground, not having caught my prey and therefore having nothing soft to fall on. Instead, hairy smelly had has salivating jaws locked around my right arm and was giving it a lively old shake for good measure. I’m not sure what hurt the most, my body or my pride. Luckily for me, his teeth had not penetrated as far as my skin.

There is no moralistic undertone in this tale, as I doubt many police dog handlers will read it, and if they did what else could they do? One hero, taken out now and again, is not too high a price to pay, and in any case, I lived to fight on.

If you would allow someone with such a misplaced belief in himself and woefully lacking intelligence to pass on advice then here goes. Feed your own dog well, and if you are unfortunate to be between an escaping criminal and a chasing German Shepherd, act like a sheep and STAND STILL.

1 Response to Police Dogs Are Twits.