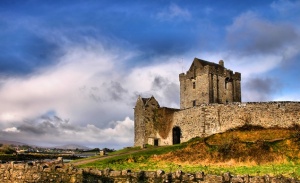 Today I drink and ne’er again will be sober,

Till I cross the sea that lays before me

And swim ashore on foreign land.

There to rest my aching body

Neath the stars that’ll shine on me.

Fare you well my friends and neighbours,

Drink my health and wish me well.

One day we’ll drink together

On that shore beyond the sea.

Green and yellow wave behind me

Fly me high and take me far.

Cast my dreams before my journey

Let no memory of me scar

Blow you wind against the barley

Play the music soft and low

Dry away your sorrowful tears.

Today you drink and ne’er again be sober

The grave you view is barren and empty

Cos that dream still lives in me

Speak my name and toast me plenty

On this Island in the sea!

Oh Mary dear, come you back in summer

Paint the meadows green with rain

Then dig the hole and hide the blame.

Dreams unfolding all before you,

Visions that only we can see.

Unfurl the flag, play the pipes.

Until we reach that land that waits us.

Can you see it over there?

Today you drink and ne’er again be sober

The grave you view is barren and empty

Cos that dream still lives in me

Speak my name and toast me plenty

On this Island in the sea!

Oh Mary dear, come you back in summer

Paint the meadows green with rain

Then dig the hole and hide the blame.

We’ll pick all the four-leaf clover

Wear it proud so all can see.

Speak the name and toast it plenty

Of this Ireland in the sea!

Daniel Kemp’s introduction to the world of espionage and mystery happened at an early age when his father was employed by the War Office in Whitehall, London, at the end of WWII. However, it wasn’t until after his father died that he showed any interest in anything other than himself! On leaving academia he took on many roles in his working life: a London police officer, mini-cab business owner, pub tenant and licensed London taxi driver, but never did he plan to become a writer. Nevertheless, after a road traffic accident left him suffering from PTSD and effectively—out of paid work for four years, he wrote and self-published his first novel —The Desolate Garden. Within three months of publication, that book was under a paid option to become a $30 million film. The option lasted for five years until distribution became an insurmountable problem for the production company. All seven of his novels are now published by Creativia with the seventh—The Widow’s Son, completing a three book series alongside: What Happened In Vienna, Jack? and Once I Was A Soldier. Under the Creativia publishing banner, The Desolate Garden went on to become a bestselling novel in World and Russian Literature in 2017. The following year, in May 2018, his book What Happened In Vienna, Jack? was a number one bestseller on four separate Amazon sites: America, UK, Canada, and Australia.  Although it's true to say that he mainly concentrates on what he knows most about; murders laced by the mystery involving spies, his diverse experience of life shows in the short stories he writes, namely: Why? A Complicated Love, and the intriguing story titled The Story That Had No Beginning. He is the recipient of rave reviews from a prestigious Manhattan publication and described as—the new Graham Green—by a highly placed employee of Waterstones Books, for whom he did a countrywide tour of book signing events. He has also appeared on 'live' television in the UK publicising that first novel of his. He continues to write novels, poetry and the occasional quote; this one is taken from the beginning of Once I Was A Soldier There is no morality to be found in evil. But to recognise that which is truly evil one must forget the rules of morality.
View all posts by Daniel Kemp →
This entry was posted in Lyricist/Author/Copywriter and tagged Agents, BBC, concept, Danny Kemp, dreams, europe and america, http://danielkemp.co.uk/, http://www-thedesolategarden-com.co.uk/, Ireland, island, London, london cab, love, Radio 4, Radio Kent, radio today, sky. Bookmark the permalink.