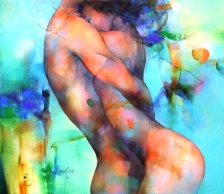 Passion lived inside a heart now sadly empty and grey.

A trace of lust had remained, but seldom had been viewed.

It fought for its life and slowly, passion was renewed.

It flowed, then raced, gathering pace, bursting onto the scene.

The like of which was remarked upon. “This has never been seen!”

It survived for just a short span of life, but into which it breathed,

A pure sense of love which before could never have been conceived.

Anything But Hackneyed. Amazon.co