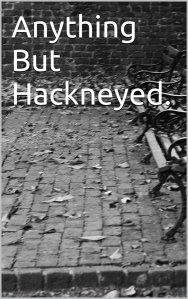 Taken From Anything But Hackneyed.

Indifference built the walls, that locked creativity in.
Self-interest added the wire, that compounded that sin.
Expression was apprehended as complacency swallowed the keys
There was no public trial, and no one listened to the pleas.
Innocence was the next to fall, trampled and crushed.
As to the deviance of wickedness all had rushed.

Greed played its hand, and what a hand it held.
Untiringly inviting, ‘till all felt compelled.

The battles have been lost that’s true, but the war is yet to end. We must stand together as one, and this world we must defend.

This world existed before us and will survive beyond our years. Hide away your diffidence and shed no more tears.

Creativity will be our sword, expression our eloquent speech, And innocence, it will be you, that bursts through the breach.

That which those four bearers of evil, has bestowed upon us all. Is now ended, and this will be our rallying call.

We must conquer and divide. We must succeed this day. That is my pledge of allegiance I offer to the God to whom I pray.”

Hope was recalled, where deep in memory it lie. It joined the side of righteousness and raised its banner high.
The skirmish was uneven, as conscience won the day. The forces of evil were vanquished and sent far, far away.

Suddenly I awoke, as the day shone into my room. It was a dream you see, and I was engulfed, in the unchanged GLOOM.

Anything But Hackneyed. Amazon.co